The square of the circle? Spending needed to tackle unemployment and housing issues, while fiscal curbing is urgent to avoid further rating downgrades

The square of the circle? Spending needed to tackle unemployment and housing issues, while fiscal curbing is urgent to avoid further rating downgrades. 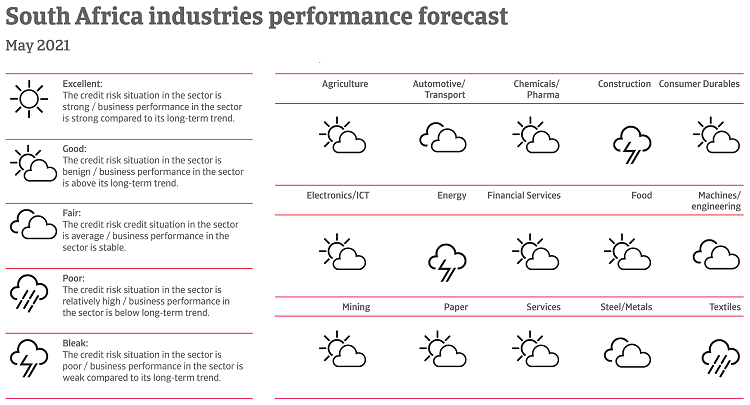 While reviving the economy is the main challenge, political support for reforms has increased

The main challenge ahead for the government is to revive the economy after the massive adverse impact of the pandemic on South Africa. Job losses have sharply increased (a 31.5% unemployment rate in 2021), and household incomes deteriorated, hitting a country that already recorded high levels of inequality, unemployment and poverty before the coronavirus outbreak. Popular dissatisfaction about the lack of social housing, employment opportunities and infrastructure shortages was also high even before the pandemic.

President Cyril Ramaphosa is known to be business friendly and willing to implement reforms in order to improve the business climate and to combat corruption. Until the outbreak of the pandemic, political in-fighting and reform-adverse fractions within the ANC party limited the ability of the government to take decisive steps in order to accelerate economic growth. However, with the severe recession in 2020 and with the urgent need to revive the economy and to create jobs, the support for the president and his reformist agenda has increased. It seems that the left-wing faction within the ANC, along with the powerful labour unions, are now willing to accept a more prominent role of the private sector and the restructuring of state-owned companies.

A modest rebound with downside risks

In 2020 the economy contracted 7%, with deteriorations in the construction, transport, mining, services (tourism and hospitality), metals, mining, consumer durables and retail sectors. In 2021 the economy is expected to grow by 2.5%, due to a rebound of both domestic and external demand. Private consumption will increase by almost 4% due to improving consumer confidence, supporting a rebound of consumer durables and retail. Investments will grow by about 4% after a sharp deterioration last year. In addition, the global economic recovery has increased demand for South African goods, with rising prices for raw materials supporting export revenues (mainly commodities), aiding the recovery of the mining sector. Inflation will increase to almost 4% this year and to about 4.5% in 2022, mainly due to higher electricity and oil prices. However, despite this increase, inflation will remain in the Central Bank’s target range of 3-6%. In 2022 a GDP growth rate of about 3% is forecast.

Corona-related restrictions have been eased since March in order to support economic activity, as the number of infections has decreased since mid-January 2021. However, the vaccination rollout will be slow, due to supply shortages and logistical challenges. A widespread immunisation is not expected before the end of this year, which increases the risk of a third infection wave in the coming months, and a subsequent break on the ongoing economic rebound.

South African banks are generally well capitalized, with a 16.6% capital-adequacy ratio of the sector. However, the pandemic and the deep recession led to rising non-performing loans (up to 5.2% in December 2020) and declining profitability (return on assets was just 0.5% in 2020). The high exposure to heavily indebted state-owned enterprises poses a risk for the financial sector. In addition, household debt is still considered high, with a household debt/disposable income ratio of 76% in Q3 of 2020. Another issue is the high level of foreign currency loans as a share of the total loans (almost 50% of total loans are denominated in USD). However, despite the downside risks, the banking sector is still considered healthy, and supervision by the Central Bank is adequate.

In order to bolster the economy during the pandemic, the Central Bank repeatedly lowered the benchmark interest rate last year, from 6.5% in early 2020, to a current record low of 3.5%. However, due to rising inflation, there is only limited room to cut the interest rate any further.

In order to spur the economic rebound, the government intends to combine an infrastructure investment plan, led by the private sector, with a major job-creating public works programme. It is planned to inject USD 6.8 billion into an infrastructure fund, with the goal of attracting more private investment via public-private partnerships. The main targets are the improvement of the network infrastructure (increasing energy supply, mainly solar and wind from independent power producers), and more housing.

However, there is only limited room for the government to provide additional stimulus if needed. Last year the government had to request support from the IMF. In July 2020, the IMF approved USD 4.3 billion in emergency financial assistance under the Rapid Financing Instrument (RFI). Government finances are strained, due to high fiscal deficits and public debt. The fiscal deficit reached a record high of 14% of GDP last year. It is expected to decrease  in 2021, cushioned by higher commodity revenues and spending curbs (mainly public wages), but to remain high at about 9% of GDP. Government debt increased sharply, from 63% of GDP in 2019 to 79% of GDP in 2020, due to structural fiscal deficits in previous years and the pandemic spread, which triggered the severe recession and a currency depreciation last year. While the consolidation is expected to continue in 2022, with a deficit of about 7.5% of GDP forecast, public debt will increase further, to 87% of GDP.

The increasing strain of public finances over the past couple of years has raised the issue of debt sustainability in the long-term. The long-average maturity of government securities, coupled with the fact that 90% of public debt is denominated in local currency, mitigates the refinancing and exchange rate risks. However, a large part of this local currency debt is held by non-residents, making it vulnerable to changes in market sentiment.

A major risk to the sustainability of public finances is large contingent liabilities of state-owned enterprises and guarantees for independent power producers. The highly indebted (almost USD 35 billion) state-owned energy utility Eskom is particularly a major contingent liability. The company, which accounts for 95% of electricity generation in South Africa, has been plagued by mismanagement and a bloated organizational structure. Lack of investment in infrastructure improvement has led to the necessity of regular load-shedding. Additional financial strain has been caused by lower electricity sales during the pandemic, and the company stated that it requires additional government support. An increase in electricity prices of 15% as of July 2021 will help improve Eskom’s financials.

In order to keep public debt sustainable in the long-term, it is necessary to avoid large public transfers to Eskom and to other inefficient state-owned enterprises (SOEs) in the future. Therefore, the restructuring of those enterprises (e.g. by improving governance and more private sector involvement) is necessary. Reforming SOEs is currently one of the government’s main targets, with broader political support than before the pandemic outbreak.

If the fiscal consolidation process goes off track or public debt turns out much higher than expected, South Africa risks further credit rating downgrades by the large rating agencies, which would make external borrowing more expensive.

South Africa’s total external debt is manageable, with about 55% of GDP and 180% of exports of goods and services. The country is highly dependent on foreign capital inflows (mainly portfolio investment). In 2021 imports increased faster than exports, due the rebound in domestic demand and higher oil prices. The current account will turn into a deficit again, leading to a higher gross external financing requirement. Financing the deficit will be more costly and more difficult, as foreign direct investment and portfolio inflows will only slowly recover. While international reserves will decrease this year and not cover the external financing requirement, the import cover is still sufficient (about seven months of imports).

The rand is a flexible currency, and the Central Bank does not interfere in the market to support the exchange rate. Historically, the rand has been very volatile and susceptible to changes in market sentiment, due to South Africa’s high dependency on portfolio inflows for financing its current account deficits. As in other emerging markets, the currency depreciated sharply in 2020 as the pandemic led to capital outflows. However, the rand has regained strength again this year, supported by higher commodity prices and the global monetary easing.

After the Covid-19 pandemic sent a shockwave to the global economy, we are looking at new hope as economies are gradually reopening

China's economy: a strong rebound forecast in 2021, but ongoing Sino-US trade disputes and increasing political strains with the US remain a downside risk

The economy is forecast to grow about 5% this year. The scope of recovery in Europe as Morocco’s main export market is playing a pivotal role.