Global value chains have undergone major shocks in recent years, as we explained in an earlier research note. The Covid-19 pandemic has upended the normal functioning of value chains. This is visible in many ways such as a shortage of semiconductors, high container shipping rates, and elevated commodities prices. Many businesses have been struggling to source inputs used in their production process or can only source them at high prices. This outbreak of the Russia-Ukraine war has only aggravated the situation. The impact is for instance being felt in the car industry, as Ukraine is a key producer of various scarce metals such as palladium (used in catalytic converters, used in cars) and neon (used in lasers for the manufacture of microchips).

We take data on the degree of backward participation from the OECD Trade in Value Added (TiVA) database. The latest data are from 2018.

Input shortages are measured using survey data from the European Commission on reported shortages by firms in “material, equipment and/or space”. The survey data are taken from European Commission’s 2022 Q2 industry and services surveys. We chose 2022 Q2 as a reference period as input shortages on the EU level peaked during this quarter. Both the industry and services survey contain a question on “factors that are limiting production”. In the industry survey, one of the possible answers (multiple can be selected) is “shortage of material and/or equipment”. In the services survey, the corresponding answer is “shortage of space and/or equipment”. We use the percentage of positive answers to these questions. The higher the percentage, the more shortages that are experienced.

We collected data on 30 sectors (both industry and services) and 26 EU countries (there was no data available for Greece). The total dataset has 406 observations.

Figure 1 shows the degree of backward GVC participation of EU countries (total economy). There is quite some variation across countries. Countries with a high degree of backward participation are Luxembourg, Malta, Slovakia, and Hungary. In Luxembourg and Malta, the figures are inflated by the financial services sector, which uses a lot of foreign content in its exports. In Slovakia and Hungary, there is a large automobile industry and a large computer & electronics sector. These sectors, which are both industrial sectors, typically have a high dependency on global value chains.

Examples of countries with weak backward linkages are Germany, Italy, Croatia and Sweden. Germany and Italy both have a considerable manufacturing sector, but they still rank relatively low on global value chain participation due to their economy size. Large economies source more inputs locally instead of importing them from other countries. Croatia and Sweden both have a strong representation in services sectors, which tend to have a stronger domestic orientation. In Croatia, the trade, transport & accommodation sector is relatively large. In Sweden, the information & communication and business services sectors take an important place in the economy. 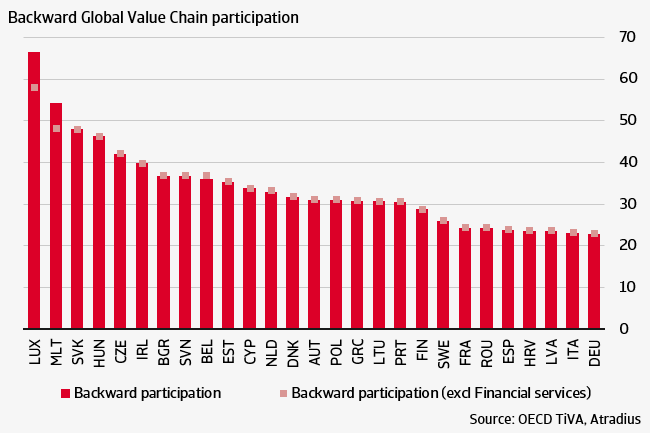 Shortages experienced by firms have increased in the past two years. This most likely has to do with the coronapandemic and the disruptions to supply and demand it caused. In 2022 Q2, 50.9% of EU industrial producers experienced material and/or equipment shortages. Just before the coronapandemic, this was only 8.5%. In the services sector, we also see an increase in reported equipment shortages, but a much smaller one: from 3.2% just before the pandemic to 3.6% in the 2022 Q2. This is not a real surprise as many services sectors were closed during the pandemic. Personnel shortages are a much bigger problem in the services sectors (29% of firms reported labour as a factor limiting the business in 2022 Q2, versus 19% before the pandemic).

In the industrial sector, there are large differences across countries and subsectors in reported material and/or equipment shortages (Figure 2). Countries that experience the highest shortages across all industrial sectors are Germany, Ireland, Sweden, Denmark, Finland and Slovenia. Among the less affected countries are Latvia, Italy, Bulgaria and Romania.

In the services sector, the differences in reported shortages between sectors are much smaller, but they are still noticeable. Countries that are most hit by shortages in space and/or equipment are Austria, Ireland and the Netherlands. By contrast, Italy, Czech Republic, Bulgaria and Cyprus are barely experiencing equipment and space shortages.

Looking at a scatter plot of GVC participation and material, equipment and space shortages, we see a positive relationship between the two variables. (Figure 3). If we plot the data by country (not shown here), the positive relationship becomes more pronounced in some cases (e.g. Czech Republic and Finland), whereas in other cases the relationship is not strong or even negative (e.g. Sweden and Bulgaria). 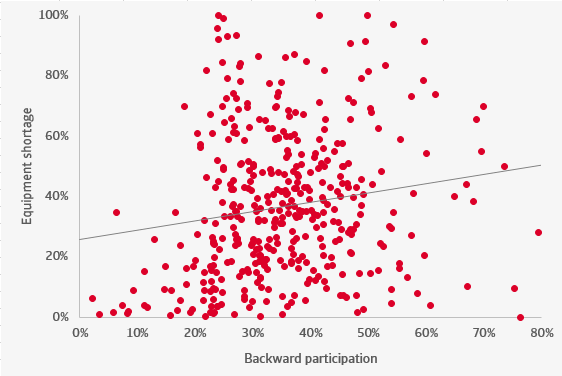 This suggests that country-specific characteristics, such as economic size and trade openness, play an important role. To investigate the relationship between backward participation and shortages further, we conducted various cross section regression analyses (see Box 1 for the basic model specification).

First, we conducted a regression without country specific characteristics. This yields a significant and positive coefficient on the variable backward participation (see Table 1, model 1). This means we find evidence of a positive relationship between the degree of backward participation in global value chains and shortages experienced by businesses.

Second, we conducted a regression with country dummies to capture country-specific characteristics effects such as differences in economic size and trade openness. This again shows a positive, significant coefficient on backward participation (model 2). Importantly, the coefficient of model 2 is larger than that of model 1. This means that the relationship between backward participation and shortages becomes stronger once correcting for country-specific effects.

Third, we conduct a regression with country dummies and two control variables: capacity utilisation and order/demand development (model 3). The idea is that sectors with a high capacity utilisation and a strong demand development, more likely need production inputs such as materials and equipment, and are more likely to run into issues importing these inputs. We therefore expect the sign of the coefficients of these variables to be positive.

In the regression output, capacity utilisation shows up significant only at the 10% level, but with a ‘wrong’ sign (it suggests equipment shortages decline as capacity utilisation increases, which is counterintuitive). The coefficient on backward participation in model 3 remains quite stable compared to model 2. This implies that the control variables hardly add any value to the model. The explanatory variables in model 3 have a weak correlation among each other. Hence, the risk of a biased estimate if the control variables are left out, is negligible.

The policy implication of the above analysis could be that firms have to try to reduce their dependence on international trade networks. Firms have several options to improve value chain resilience, including reshoring production, diversifying suppliers and holding more inventory. However, as we argued in our previous research note, all these options come with significant downsides and costs. There could be some strategic reorientation in critical sectors like energy, sensitive technology, food supplies and medical equipment. But we do not expect to see a major step back on the globalisation ladder as the key economic rationale behind global value chains – the opportunity to exploit differences in labour costs – still holds.

To a certain extent producers have to live with distortions during unusual times such as the coronapandemic. Recent data shows an easing of value chain bottlenecks. Chip shortages are declining as chip manufacturers ramp up production, whereas logistical bottlenecks are also easing (declining shipping rates). Despite the improving situation, it may take well into 2023 for value chain distortions to resolve.

The Covid-19 pandemic and the Russia-Ukraine war pose challenges to global value chains.

Economic disruptions from the war in Ukraine, lingering lockdown restrictions and multi-decade high inflation have generated a new set of adverse shocks for the global economy

Inflation expectations yet to decouple from ECB target

Despite rising inflation in the eurozone, we argue it has not yet sprung loose from the ECB target in the medium term