The US-China trade war and political unrest are a double whammy for Hong Kong's economy.

A system benefitting both mainland China and Hong Kong

Hong Kong has been enjoying its special status for a long time, supported by the widely known concept of ‘one country, two systems’. Since the 1997 handover, the ‘Special Administrative Region’ (SAR) of China has seen several recessions and periods of financial market turbulence. However, that does not detract from the fact that Hong Kong, being China’s main financial and trade hub, has strongly benefitted from the mainland’s huge economic expansion in the last two decades.

China’s economic boom explains distinctly why Hong Kong’s GDP as a share of China’s output fell sharply, from 16% in 1997 to 3% in 2018. Hong Kong’s economy grew on average 3.8% annually in the last twenty years, compared to more than 9% growth in the mainland. However, despite the decreased economic weight, Hong Kong remains of major economic and financial relevance for the mainland. The SAR provides China with access to foreign capital as, unlike Hong Kong, China maintains a relatively closed capital account. Hong Kong hosted almost three-quarters of all of mainland companies’ initial public offerings overseas during the period 2010-2018, 60% of their overseas bond issuance and 26% of their syndicated loans. In the same period, 64% of mainland China’s inward foreign direct investments (FDI) came via Hong Kong. Meanwhile, 65% of outward FDI was channelled through Hong Kong, and the city facilitated many Chinese companies’ overseas acquisitions. Just as mainland China is important for Hong Kong, the city still plays an indispensable role for China. However, while the ‘one country, two systems’ concept has facilitated a symbiotic relationship, it recently has come under pressure.

As mentioned above, Hong Kong has seen difficult times before. The Asian crisis of 1997, financial turbulence one year later (when property and equity prices fell and the economy suffered a severe recession) and the SARS outbreak in 2003 all brought challenging times. The global financial crisis and the following recession in 2008/09 also had a substantial impact on the very open, trade-dependent economy. Currently the escalating US-China trade war and the simultaneous political unrest in the city itself are a double whammy for Hong Kong.

The trade war has a major short-term impact, as activity in the transport, tourism and retail sectors is affected by declining international trade. At the same time, the massive protests that started in June have been disruptive to both consumer spending and investments. Shoppers stay at home, leading to retail sales declining almost 8% y-o-y in June and revenues falling much faster. Inbound tourism decreased almost 40% y-o-y in August, especially from mainland China, but also from countries like the US, UK and Japan. Hotels, running on low occupancy, have been forced to lower prices dramatically, and foreign investors have turned cautious. Signs of weakness come from the forward-looking purchasing managers’ index falling further into contractionary territory in July and merchandise export receipts decreasing in June and July. A recession is likely, as real GDP decreased 0.4% q-o-q in Q2, and in Q3 performance is expected to be equally weak. In 2019, we forecast a modest 0.5% economic expansion. 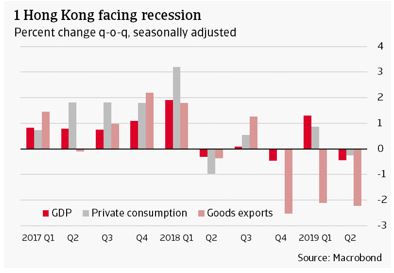 In 2020, Hong Kong is expected to continue to suffer from a weaker global economy, especially from the repercussions of the ongoing Sino-US trade war. However, the economy could recover slowly over the course of next year, as a peaceful resolution of the social instability is the most likely outcome.

It should be in the interest of both the authorities and the protesters to find a compromise to this crisis. If the situation deteriorates, then there could be a loss of investor confidence. Strong warnings in that respect came from Fitch Ratings, which downgraded Hong Kong in early September, and Moody’s, which changed its rating outlook to negative not much later. Whereas Moody’s cited the rising risk of erosion in the strength of Hong Kong's institutions, Fitch flagged risks to the stability of the business environment and the international perceptions of its governance system and rule of law. At this point, there are no clear signs of capital outflows though. In an adverse scenario, large deposit withdrawals could also affect the cover of the monetary base, which is crucial for holding up the currency peg to the US dollar.

However, securing a stable future for Hong Kong in the long-term goes beyond a peaceful settlement of the current political problems. The current issues between the US and China have a much broader scope than trade alone. They also encompass a non-level playing field for direct investments, intellectual property issues and growing competition for political influence in the Asia-Pacific region. Besides the US, Australia, the European Union and Japan are increasingly worried about China’s international stance, with the European Commission recently labelling China as a systemic rival, promoting alternative models of governance. Within the region, China’s Belt and Road Initiative and its more assertive stance in the South China Sea conflict are increasingly counterbalanced.

For Hong Kong, as well as the whole Asia-Pacific region, the outcome of the ongoing rivalry between the US and China will be pivotal in determining whether a cooperative or antagonistic balance of power relationship will exist between Beijing and Washington.

Competition from other cities

Besides the Sino-US relationship, economically competing cities pose another risk for Hong Kong. Shenzhen, Hong Kong’s direct neighbour and well known for its manufacturing industry, could develop into an alternative hub that guides multinationals and financial services to mainland China. In August 2019, Beijing presented a master plan for Shenzhen, including the city’s development as a centre, not only of technological innovation, but also for financial and foreign trade. To reach these targets, Shenzhen will seek to attract foreign experts and talent by making it easier for foreigners to obtain residency visas, which would in turn, allow them to become legal representatives of companies in China. Ultimately, after liberalising its capital account, Beijing plans to integrate the financial markets in Shenzhen, Hong Kong, and Macau.

Although Shenzhen is well on its way, the city is not yet an alternative to Hong Kong. Indicators for development, competiveness and government policy for Shenzhen are better than for China as a whole, but the financial and legal infrastructure still lags that of Hong Kong.

For now, Singapore with its legal security in business matters and stable political system seems to be a better alternative to take over Hong Kong’s role as the region’s main financial hub. According to a recent survey by the American Chamber of Commerce in Singapore, 22% of companies with operations in both cities are considering moving out of Hong Kong. More than 90% choose Singapore as the best destination for their capital or business activities away from Hong Kong. According to the World Bank Singapore ranks as the second-easiest place to do business, after New Zealand.

Hong Kong is still well-positioned with a sixth place in the same World Bank ranking, and is not lagging behind Singapore regarding the resilience of its banking sector, its fiscal position or the skills of human resources. However, the escalated trade war and the political unrest have put Hong Kong in a challenging situation. We expect that Beijing will not jeopardise the benefits of the ‘one country, two systems’ concept in the coming years. It seems most probable that China and the Hong Kong authorities will find a quick solution to stem the unrest and restore trust in Hong Kong as a stable financial centre. In the longer term, the shape of the relationship between China and the US and other Western countries will determine whether the city will uphold its specific role or will lose the competition with Singapore and/or other cities.

World trade growth stagnated in Q1 amid the escalating trade war. While we expect some recovery in 2019, further escalation of the trade war could grind growth to a halt.

Private debt could amplify costs of the trade war

Private sector debt developments in the US and China probably won’t trigger an economic crisis but could deepen a downturn, possibly triggered by the bilateral trade war.

The global economy is losing steam in 2019 and 2020. Ongoing uncertainty regarding the trade war continues to cloud the outlook.